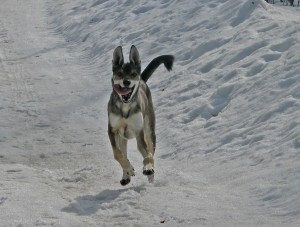 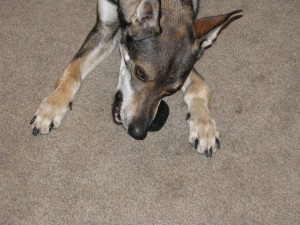 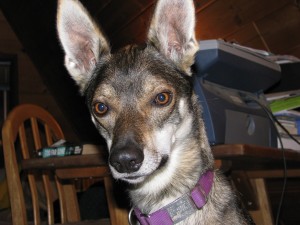 This is where genetics in a sled dog can go terribly awry.  Yanert was born in an “accidental” litter.  The person was going to euthanize the puppies but a gal intervened and said she would find homes for all of them.   As a 4 week old puppy he was very very sick.  The original owner and friends took the puppy away from the mother for a couple of weeks and nursed him along.  He was bottle fed and soon gained enough strength to be returned to the mother.   Yanert was given to a young girl that couldn’t afford to take care of him.  He was just starting to show signs of his genetic disorder but everyone thought that he had rickets because of nutritional deficiencies.  Don and I were called to see if we would foster this 3 month old puppy until he was healthy.  We took him thinking it was ricketts as a veterinarian had said and that we would just feed him and care for him until he could be adopted.  Well, as the months went on this puppy just wasn’t improving much.  His front legs had huge knots at the wrists and he was skin and bones.  We had a full bloodwork done on him plus x rays and turns out that he has a rare hereditary disorder called chondrodysplasia and also has hereditary anemia.  So, after months of figuring out a food that he could assimilate (and we went through a lot of foods plus hamburger in addition!!) we finally found a holistic food with no grains and salmon based that Yanert thrived on.  His front legs remain “deformed” (as you can see his right leg in the picture of them playing) but he has adapted well and can run and play hard.  His current weight is 56 pounds and he is no longer the emaciated dog that we started out with.

Of course, after going through all of this with him we couldn’t adopt him out to someone else so we adopted him ourselves.  He loves to run and play and he needs a lot of exercise to get him tired.  At 3 years of age we are hoping for the best for his future.  There will probably be some arthritic problems and often when we watch him run it looks like those front legs might just fold on him….but all of his other muscles have compensated for his lesser ones and as most dogs do–he accepts where he is in life and loves it to the max.

I’m very interested in dog heredity and the sled dog lines are amazingly documented.  Many sled dogs in Alaska have many of the same bloodlines.  And you see the genetic disorders from certain lines continuing.   This particular one is very rare and both adults would have to be a carrier of this recessive gene.  Other more common genetic disorders in sled dogs up here has been laryngeal paralysis (as Chanel has), severe over bites or under bites and thyroid problems.  People should know and understand the backgrounds of their dogs before breeding more puppies but a lot of people don’t pay much attention to this and often severe genetic problems continue to get passed along.