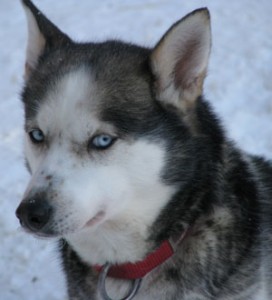 We have had some shy dogs come our way but Kiche has been one of the shyest.  It was fate that we got her in the first place.  She was rescued along with her newly born puppies from a neglect situation.  After the puppies were raised and off to new homes the original rescuer gave her to another person.  She was so shy that unless you took her chain and went hand over hand to her, she would bolt away and never let you pet her.

At her new place she was chained with a smaller group of dogs but still not really given a lot of attention.  One day she got loose and ran off.  She was gone for 3 weeks.  The person would see her occasionally hiding in the woods and he had set out a live trap, but Kiche never went in it.  We had told him that if she is caught we would take her.

I had a dog, Venus who had severe seizures.  We kept her comfortable for many months and were able to keep the seizures under control (the vets said she probably had a brain tumor) until one morning when I knew that it was Venus’s time to be out of pain and her grand mal seizures.  I knew that she was ready to go onto her next life where she was free of this malady.  So that morning I had her put down.  In the afternoon the foster person to Kiche called.  Kiche had walked into the live trap and was caught.  I truly believe that Venus had something to do with this….

So we brought Kiche into our lives.  She was a wild eyed dog afraid of everything.  You couldn’t touch her at all.  So over the months we never forced any of our ways onto her.  We let her get used to our comings and goings, our routines of the dog yard and our voices.  We started taking her on walks and she was great on a leash, never trying to bolt.  But we still couldn’t touch her much.  You could see the panic in her wild blue eyes if you attempted to get too close.  Gradually we started petting her under the chin.  Then the sparks started to connect in her brain.  She liked the scratches.  Slowly she trusted us to pet her over the head and down the chest and under her belly.  Today she is a dog (3+years later by the way….patience is the key!) that follows me around the yard when I am cleaning up.  She barks a LOT but it is part of her endearing traits.  Her wild blue eyes have softened to the world and every now and then she will turn for a good butt rub.  She is still extremely timid around other people but has become a wonderful part of our family.  She is never chained up (except to eat) and is in one of the freedom yards with Chiclet and Lichen (who is the most feral dog I have ever had).  We used to have to put a leash on Kiche to get her into the house or the dog barn, but now she readily goes in on her own.  People might think that 3 years is a long time to “wait” for a dog to become friendly, but some dogs have had such trauma in their lives that even small increments of trust are huge in their eyes.

I always tell people to never give up on a shy dog.  They do learn to trust and to love if given enough time and consistancy.  Even if that means years.