I first saw Shaman in the corner of the euthanasia room at the Fairbanks shelter.  He had been confiscated with many of his kennel mates from an abuse situation.  He was totally unsocialized and one of the most fearful dogs that we have ever had.  In the room he was crouched in the far corner with his nose pressed to the wall, frozen and unmoving.  When I went over to him he barely responded to my touch.  I could tell he had probably never been petted before.  His fear of humans was strong but his distrust wasn’t aggressive.  He would move his eyes around if there was a noise or someone came into the room.  I could tell that deep inside he was a curious dog that had a bad start at life.  (and he was only 8-9 months old!) 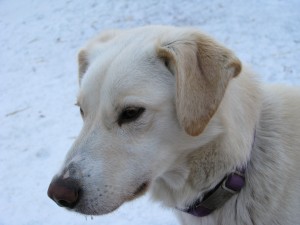 An ACO (animal control officer) came into the room and said “it is time for him to be put down.”  I really didn’t want another dog but there was something about him that grabbed at my heart.  So out the door we went.  Don and I had talked before about not getting any more dogs.  We really wanted to concentrate on the ones that we had and not bring anymore into our pack.  When I got home I left him in the car and like a shy dog myself, crept into the house and went up to Don.  “uhhhh…guess what?” I asked with a sheepish look on my face.  He knew I had been at the shelter and said “What did you bring home?  Let’s go meet him.”  (thank goodness for a person in my life that loves dogs as much as I do).

We were both amazed and shocked at the true fear that Shaman emitted.  I had to hold on strong to his leash for he dove under the car and I knew that if I let go he would have been gone.  We started out very slowly with him.  He loved other dogs so that was a good start.  He doesn’t have a mean bone in his body and he lets other dogs pummel him, hump him and chase him (all of which he loves!)   As he has gotten more confident he can play just as hard and has become quite noisy in his play.  He would never come up to us for many months, probably a year.  It has taken him a long long time to feel at ease around humans.  He is still skittish at times here at home but as you can see from the pictures he loves attention and pets.  He follows us around the yard and just enjoys being part of the pack.

He is also a driven skijoring dog.   This dog loves to run and he is fast!  He never tires and is a good gee haw leader.  A big problem though is that he is still afraid of most people.  When I have taken him to the starting line in a race I have to tell people there not to touch him.  Once, someone did grab at him and quick as a flash he was out of his harness.  I was sure that he would bolt and not come back, but he ended up doing the whole race course, passing many teams and came back and flew under the truck where I easily got him.  whew.

It will probably take him another year before he trusts others.  We are working on this and he has accepted our friend Sara’s pet easily.  He is a happy settled boy at home and loves to be with his 3 girl friends in one of the freedom pens.  He is rarely ever chained up.  He is non stop energy and needs to run free to be satisfied.