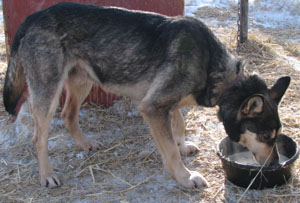 Update February 20th. Leo is thriving. He loves to skijor. He will run lead or swing. He is a robust boy that still has some years left. He is a fun dog to have around.

Update January 25th. Leo is such a ham. A super happy guy that loves to eat, run, play and be warm. At first he wasn’t sure about going in the dog barn when it got cold. But OH!! Once he realized he could sleep where it was nice and warm we now have a hard time keeping him out for his exercise time. He has come a long way, comes when called, loves pets and treats and is a true joy.
This picture was shortly after we got him. He has filled out and has a nice shiny brown coat. I will take new pictures soon.

Update September 9th. We love this boy. He is a happy go lucky guy that loves to play with other dogs. He also LOVES to eat. We have to be careful with his weight for he could really get fat if we aren’t careful. He has had no problems with his health and even eats pieces of kibble happily swallowing them all at once (we keep them small!) even without most of his teeth.

Update May 14th.  Leo is doing great.  He spends quite a bit of time in the house but loves laying outside in the sun.  His coat is beautiful and he is gaining weight.  He loves other dogs and plays happily.  He is a super nice all around older dog that wins your heart with his perseverance.

Update April 23.  Leo is doing great in his foster home.  He is still dealing with his lice problem but looks like he has them licked.  He hasn’t had any seizures since being in foster care so that is a good sign.  He is eating great and because he still has some opposing teeth (2 on the top and 5 on the bottom) he has no problem keeping his tongue in his mouth.  He got a check up on Thursday and his mouth is healing quite nicely.  He had a lot of ulceration from his dental disease and that is healing up although he will always have some scaring.

He is getting another good bath on Saturday to get rid of the last patches of lice.  His coat is lovely and he is continuing to thrive.

Update April 14  Leo is in foster care now.  He had lice and had a couple of seizures which we are hoping are just related to his poor condition and stress of surgery.  He is a dear sweet boy that is loving the food and attention he is getting.

Update April 12, 2011.  Leo had most of his teeth pulled almost a week ago.  When I saw him at the shelter today he was a different dog!  Happy and very young looking.  This poor boy was in so much pain it was making him look like a 14 year old dog.  I’m not sure of his age.  He isn’t young, but he isn’t super old.  He wants to retire at your feet and take long walks and eat canned dog food!

(first post April 6)Leo is an older neutered male that had horrid dental problems.  Well, those dental problems were fixed today with major work on his terribly painful and infection filled mouth.  He should feel great in a few days.  Leo would love a home where he can retire in style and go for long walks by your side.  He is a very sweet and gentle boy that deserves a painfree rest of his life.  He loves to ride in the car and is quiet and watches the sights go by.