Update on Leo(September 5) He is a happy chunky boy. He loves to play with his friends and runs crazily around the yard barking joyfully. He is a smart boy that loves pets (once he gets to know you) and loves to eat. 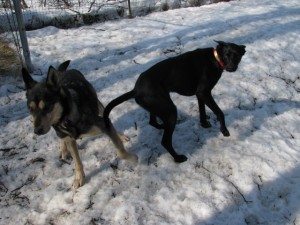 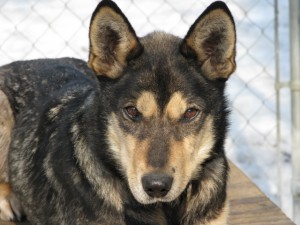 Sweet Leo.  He came from a situation where his owner could no longer care for him or his kennel mates.  Most of the dogs were in pretty good condition but Leo had terrible teeth and was very thin.  Thanks to the Shelter Fund, Leo was given a full vet check and it was determined that his teeth were in such horrid condition that they should all be pulled.  So he had surgery and from what the vet said, even the bone was disintegrated.  Poor guy.  To have lived like that for many years with the pain and discomfort just makes my heart go out to him all the more.  They left a couple of opposing teeth (and that helps to keep his tongue in his mouth!)

He also had patches of skin that looked rubbed off.  It turned out that he had a body full of lice.  Geesh!  Did this dog get any breaks in life?  So he was treated with Ivermectin and back to the borough shelter he went.  Next thing I hear is that he had 2 seizures at the shelter.  OK, that’s it….Don?  Yes!  We went and brought Leo home.  He has been in a separate pen until we are sure he is lice free.  We had a fun time taking him to the Dawg Wash here in Fairbanks.  They have large tubs that have sprayers, shampoo, grooming equipment and lots of towels.  Don and I put on the plastic aprons and went to work.  Lots of special shampoo that the vet had given us kept him soaped up.  Other than the initial spray down he really liked being scrubbed all over.  There were many patches of lice that we dug off his skin.  We used different grooming tools including fine toothed combs.  A nice rinse and a brisk towel dry and he was ready to come home.

The last couple of days we have been letting him meet more of our dogs.  We haven’t seen him scratching at all and are just finding dead patches of lice….so hopefully none of our dogs will start the lice birth process all over again.  Luckily lice usually don’t attach themselves to clean healthy dogs…..

He liked Pixel although I think he thought she played a bit too hard.

So, Leo is in foster care through the shelter for now.  He has another check up this Thursday but the way he is eating and acting I think it will go well.  He is a sweet and happy boy and having no more pain.  We can only hope the rest of his life is much better than the last several years that he had to endure.