Yukon has been adopted! 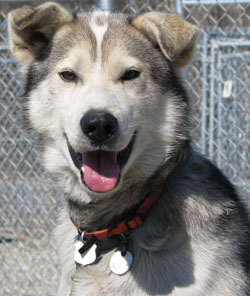 Yukon is a beautiful and very social husky.  He has also run the Yukon Quest!  He still has his number tag on.  We don’t know if he finished or not but he at least had enough miles on him to start the race.  He is a larger boy that would add some power to your team.  A very friendly boy, he would probably make a very strong skijor dog also.