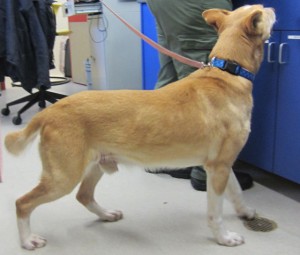 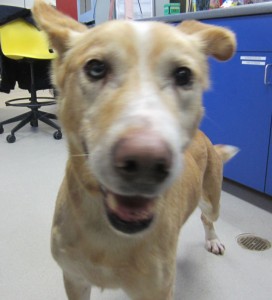 Update: July 1 : Siku is back in SCl foster care.  His adoptive family was unable to care for him and luckily they called for help.  He is back at his original foster home.  He is in a bit of rough shape.  His coat is patchy with demodectic mange often caused by stress on the immune system.  This poor guy had a hard time at his adoptive home and is now under treatment.  He will bounce back as dogs are so resilient.  But he really deserves that forever home for the last golden years of his life that will love him and take care of him.

Update: October: Siku has been adopted.  Into a great home with a friendly family who will really love him.  We can’t thank his foster mother enough!

Update August: This boy has just blossomed.  He would love a forever home where he can go on trail walks (loves walks and can run off leash as he never runs off) and rest at your feet after a good day of fun.  He used to be very scared of going into places like Coldspot Feeds, but now he pulls his foster person through the door to go and greet everyone.  He has certainly come a long way in his socialization and is a very happy boy.  He is older so probably not suited for a mushing home any longer.  And now that he has lived in a house and where it is warm in the cold winter months, he doesn’t want to be left outside when it is chilly!

Here is the update from his foster person:

“Dr. Y wanted Dr. Cole to have a look at him, so we did that yesterday. We did not do xrays, but she did measure his range of motion and musculature. Definitely his pulling career is over, but she says he is in great shape. She remarked at how strong his back is. He is cleared to continue to do as much free walking and free running as he likes. He looks very good to me – no head bob, just some slight crabbing to the right, but I do see him run, and I do see him switch leads while running. And he almost never paces any more. So he seems to be doing his own PT very well.

I don’t know if there has been any interest, but I think he would do fine as an only dog. I think he would enjoy a home with young children and a stay at home mom, or any other situation where he gets to have a person all to himself. He is fine with little dogs, and not interested at all in squirrels or other prey, so I’d imagine cats would be fine, too.

I adore having him, and I’d love to keep him forever, but I know there are other dogs who need a jump start, too.

He’s pretty normalized these days. He cracked up the vet office when he approached a lady hanging on to her cell phone. She said, “What is he doing?” He’s a ham, and he loves to have his picture taken! He was posing for her.

He invented a wave trick when I withheld a treat, so he is waving now. We are also working on sit and down stay, which he can actually do. He can also now not freak out and shut down and try to run away if I say “no” or “uh-uh” or “whoops” when he makes a mistake.

He chastised me yesterday when I got back for leaving him at home when I went to walk a little dog I am dogsitting. lol That was a first.

Apparently I did not latch our gate properly one morning when I left with the young dogs to go walk that same dog, and John came out an hour later to find the front door and the gate wide open and both the old dogs were just sleeping in the house. lol I do let him know when I am leaving him at home or in the car. Other than when I got a bit of a barking upon arriving home, lol, no signs of separation anxiety.”

Update July: Siku is doing great in his foster home.  If you are looking for an older dog that likes to go for walks, can go off leash and is happy to curl up on a big comfy dog bed in the house, please let us know!  He has come a long way in his foster home.  Please contact info@secondchanceleague.org

Update April 21: Here is a note from his foster person:

We went to Denali yesterday with the whole gang.  They ran with the bike attachment on the park road.  12 miles. 6 miles out and 6 back from 30 mile Teklanika.  Total average speed for was just under 6 mph, but 7 mph is Siku’s cruising speed.  I think we stopped about every 3 miles or so — the dogs aren’t heat-tolerant at all, but they did really well. I had no trouble getting everyone to drink!  Siku was still raring to go when we were done.  He wore out my two young ones.  (The oldest had to stay in the car.)  He LOVES exploring!

Ethan is a trained up sled dog having run races such as the Kobuk 440!  Wow!  What a boy.  But at 9 years of age he was having trouble keeping warm and ended up having some seizures.  He was brought into the Fairbanks shelter and got a complete medical workup including a teeth cleaning and got a very bad tooth pulled.  Nothing indicated any other sort of seizures and he has been given a clean bill of health.  He had been at the shelter for several weeks when a potential foster person met him and fell in love.  Ethan was pulled into SCL and settled into his new foster home with 3 other pals.  He is going to love to skijor and live in a house and learn all kinds of new things.  If you are interested in giving Ethan a forever home, please contact SCL.

Update March 24: A pic of Siku (new name) starting out on his skijoring circuit. 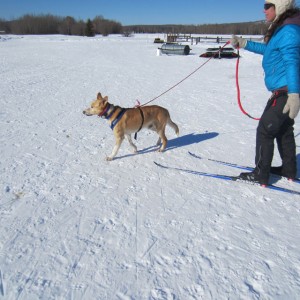