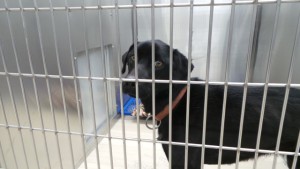 Update March 17th: JarJar has been adopted into a working home.  Hope he enjoys it and things go good in his life.

Update March 15th: JarJar is back at the shelter.  He really needs an active!!! family.  He is not relegated to the outside yard instead of being inside.  He is neutered now and today he learned how to play ball by watching Romeo.  They were playing hard with each other with a fence between them.  JarJar just wants love and attention.  And if he had someone like Romeo to play with I think that would make his life much happier.

Update: JarJar has been adopted.

JarJar is a funny boy that makes me smile.  He is a husky/hound mix that would love an indoor home.  I bet he would skijor too!  He is inside at the shelter as he has a very short coat.  It is said that there were some dogs he didn’t particularly take to at his last home but there have been no signs at the shelter that he doesn’t like other dogs.  Neutering will certainly help his tendency to possibly be a bit standoffish.  He loves people.