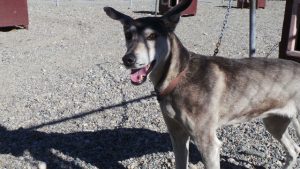 Update: December.  Tyra is in foster care.  If you are interested in her you can inquire at the front desk.

update: Tyra was adopted….then brought back. Was adopted again….brought back again. Tyra really needs a home where she can shine as a working dog and a pet.  When left to her own devices she likes to rip stuff up.  But she just wants to have a job and not be left for 8 hours a day, alone.

More of the large group of dogs being dropped off at the shelter.  Tyra is super sweet and funny.   All of these dogs so far are short coated, more sprinty type dogs.  Past their prime of top speed but I bet they would love to skijor and be your best friend!!  Tyra is outside.

Tyra and Cambell are actually siblings although they look SO different.  They were both born in 2007, thus they are 9 years old.