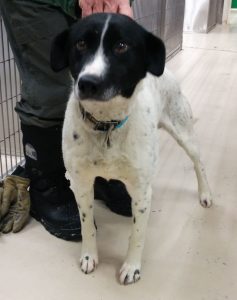 Update: Joel was adopted!!  Sounds like a wonderful home with lots of running and sleeping on a plush bed in the warmth.  I’m so happy for Joel.  Thanks!

Update: January 2017.  Joel is still at the shelter.  This active boy is super friendly and would love an active family.  After this next snowstorm moves through I’ll try to get Joel out and see if he will skijor.

Joel is a pointer cross.  He is only 1 year and 7 months old.  So still a bit of a puppy.  He was turned into the shelter from a mushing kennel because he didn’t want to go forward.  Sounds to me like he was a bit of a handful on the line.  Often these pointer mixes just take a lot longer to mature.  And he is just a baby!!!  I bet if someone took the time and patience to work with Joel he would reward you with devotion.  He is short coated and loves being inside at the shelter where he can stay warm.