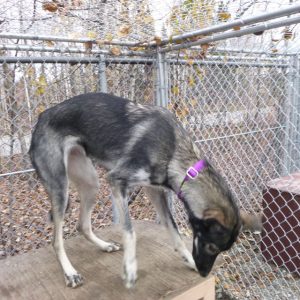 Update January 25: Kiba most likely has found a forever home.  I’ll keep you updated.  He is thriving at his foster home.  Loves all dogs.  Comes when called.  Great dog!

Update Dec. 21: WOW.  This pup is amazing.  Not even a year old and LOVES to run up front.  Is a fast sprint dog.  Loves to skijor.  Loves other dogs.  He is a super dog that is looking for a perfect home.

Update Dec. 7:  Kiba is shining.  He went skijoring today with another dog and its like he has done this his whole life.  Other than the one time I ran-joured with him, he had never been in harness, never been in front of skis.  He is a total natural.  And only 11 months old!!  At his foster home, he is getting along with the dozen other dogs. He loves to play, but when he comes inside, he is chill and finds a dog bed to curl up on.  He loves people and would love an active home.

Update Dec 4:  Kiba was pulled into The Second Chance League.  If you are interested in this dynamic puppy please contact info@secondchanceleague.org      He already has a new pal at his foster home and I was sent a short video on the 2 of them running and playing in a huge field.  I’ll keep updates posted here.

Update:  I took Kiba out today on a canicross run!  Short but oh so fun.  This boy has never been in harness.  He can be a bit wild to put a harness on.  I used one of the half harnesses.  I hooked him to me with my skijor belt and line and off we went out of the parking lot and down the bike path.  WOW.  This boy can RUN.  He is super fast (my poor legs are going to be sore tomorrow) and driven.  He loved being out front and even with traffic, snow graders and wrappers on the bike path (one of which he grabbed on the run!) he didn’t flinch.  I can see this boy in a skijor team or even a sprint team.  He is super skinny right now.  He definitely needs some weight on him.  He got a bad rap from his first home, but being a puppy still at 11 months old, this boy had tremendous potential.

I had a hard time getting a good picture of Kiba.  He is a VERY active puppy.  Not even a year old, but he has had a hard start to life.  He was in  a pet home and probably not given enough exercise.  He had spats over food with the other dog in the house and wanted to go after the cats.  He wanted to chase the goats and seemed like he was always getting in trouble.  This tall, lanky sprint husky needs a JOB!!!  He is sweet with people.  Loves everyone.  As you can see from the one picture he was in a kennel next to a big male dog and he paid him no attention.  His write up at the shelter makes him look pretty bad, but this is a young dog that would thrive on hard work.  He would love to run and run.