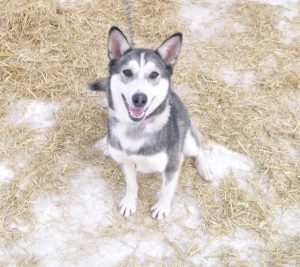 Update April 7: Jester decided he just didn’t want to be much of a sled dog.  He is SO goofy.  He loves to play ball and throw the tug by himself.  He loves people.  He will need a fenced in yard as he seems to have the tendency to want to explore all that is around him.  He would make a great pet/running/hiking pal. I bet he wouldn’t run off once bonded to you.  A fun all around good dog.  He is in a new foster home now.

Update March 11: Jester was in his first tour team!  The foster person said he didn’t seem to know what to do (maybe never in harness?  We didn’t know as there was no paperwork left for him when he was dropped in the after hour cages at the shelter).  But he caught on pretty quickly and pulled happily the whole tour.  GO Jester!

Update March 5: Jester is being pulled into The Second Chance League.  He will hopefully soon be giving tourists an amazing amount of affection and mushing rides through the forest.  Happy boy.

Jester is SUCH a happy boy.  He loves everybody.  He is VERY enthusiastic and strong.  He would make a great team member with a person that does tours in the winter.  Did I say he LOVES people?

This boy has been at the shelter for a long time.  He really deserves a working home or a skijoring home.  I bet he would love to live inside after a good day of exercise and lay at your feet contented.  He is outside at the shelter.