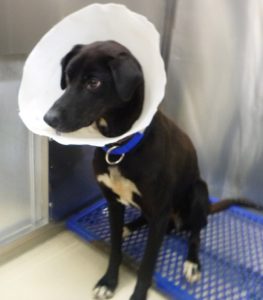 Update August 17:  Randall has been adopted.  I think this one will work.  A small team to run in.  People that love dogs.

Randall is still available.  I thought he had been adopted but he is still at the shelter.  He is a great, friendly dog!!

When Randall gets his cone off I’ll get better pictures.  He is a neutered 6 year old sprint dog who is at the shelter because he couldn’t keep up with his team any longer.  He was a supposed lead dog.

I love this boy.  He is totally sweet.  Gets along with children and other dogs.  He has kind of a “ratty” coat and will get checked out on the 29th.  It could be low thyroid or nutritional.  He would LOVE to have a home where he can sleep at your feet after a long day of running or biking or skijoring.  Once he gets to know you I think he would be awesome off leash as he is very attentive to people.  A real love.