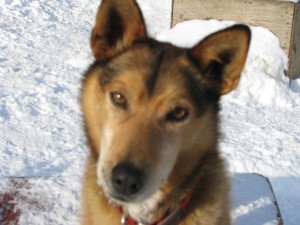 I first met Loon when she was about 6 weeks old.  She was in a litter of 9 puppies.  She was the only red one and was the runt of the litter.  For some reason (fate I’m sure) she grabbed at my heart with her great spirit and spunky nature.  I remember telling her owner that if she didn’t work out for them that I would be interested in taking her.  Well, when she was a year old the owners called me.  She was just too tiny for their team.  She came to me with her fur chewed off the front of her legs, her hips and her tail.  The owner thought it was because she was so high strung and bored.  But I found out it was because of some pretty severe chiropractic problems.  (chewing of hips, legs and tails is a classic symptom of chiropractic problems).  So she had many treatments to get her back into shape.  This little dog will do anything!!  She is now 9 years old.  She runs for anyone.  She is one of the leaders when we run shelter dogs.  She has skijored with a lot of different people and has even been in the Limited North American sled dog race in the 4 dog class.  This is a time that I remember I just cried!  On the 3rd day the person that was borrowing her called me up…said he had to drop his other leader and did I think that Loon would run single lead?  I said “of course!”.  Nothing thrilled me more than on that 3rd day of the biggest limited class sled dog race in North America than to see Loon bringing that team home up the hill all alone in single lead.

She is also a great cheerleader.  Whenever we run you can here her high pitched bark for a half mile from the start.  I guess her father used to do the same thing….yip yip yip until the team would settle in.

She used to be in the house a lot but for some reason as more dogs came into the house she ended up back outside most of the time.  But lately we have been free running her a lot (she never runs off) and one day it was raining and the dogs were soaking wet.  So I decided to bring her inside and that is where she has been ever since.  She is a great little house dog.  Very devoted to me and gets along well with all the other dogs.  I’m not sure why I didn’t bring her back inside a long time ago!  (of course, all of our dogs live in the warm dog barn during the winter but having them inside and closer to us all of the time has great rewards.).

So Loon has made the 16th dog in the house!