I have always hated Elizabethan collars.  The dogs are uncomfortable in them….they can’t turn around in a crate or lay down comfortably with the “cone” surrounding their head.  I will describe what we use for most of our dogs that have gone through surgery and are not allowed to bother the incision.  Thanks to Dr. O. for this suggestion years ago.

Borax just had a tumor taken off his rectum.  With the external stitches it is imperative that he doesn’t chew or lick this site.  So, this is what we do. 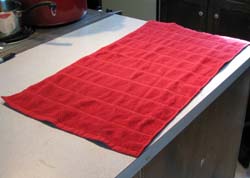 SECOND: take a thick layer of newspaper and fold it into the middle of the towel (it should be fairly thick and stiff)

THIRD: Using a heavy duty strapping tape (or duct tape which is my favorite and nearly indestructable) tape the seam of the towel with the newspaper firmly inside. 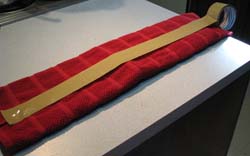 LAST:  Wrap it firmly around the dogs neck and secure the towel with duct tape.  (do not tape to the dogs fur).  The towel should be around the dogs neck tightly so they can’t slip it over their heads, but not too tight that it restricts their breathing or their feeding or drinking. 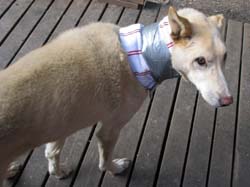 I take off their collars but you can certainly put on one over the towel set up.  Now, Borax still has a lot of freedom yet can’t move his head all the way to his back end to lick!