Onyx and her digestive problems 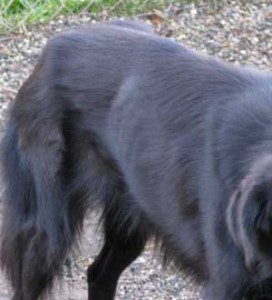 We have had Onyx for several years.  Pretty much ever since she was rescued she has had a terrible problem with digestion and keeping weight on.  This is part 1 of a blog which I am hoping that in the end will have a picture of her “fat” and healthy.  Over the last couple of years she has been on several different diets.  High protein, high fat….high protein low fat….one protein, one carbohydrate….hypoallergenic…raw….It seemed that we could change her diet and her system would be OK for a few days…then sink back into pretty much only diarrhea.  She has had total blood panels, fecal/’worm floats, parasite tests, x rays and tests for more rare diseases such as Addisons disease.  Amazingly her blood work looks fairly good for an emaciated dog and all the other tests have come back negative except for giardia which she was treated for.  This picture of her body is Onyx at the worst.  36 pounds.  She has been on various drugs including steroids, panacur treatment (for worms and giardia), metronidazole, Tylan and antibiotics to name a few.  It was a couple of weeks ago that she finally just “blew up.”  The vets were shaking their heads.  I was worried about just waking up one day and she would be dead.  For several days anything she ate would come out the other end as a spewing mess….no form…just brown stinky fluid (try cleaning that off your concrete floor a dozen times a day!)

So after posting to several dog email lists for opinions and talking more to my vet I ended up taking her to a holistic vet.  She thought she might have a weird parasite but no one knows for sure.  The vet gave her 300 ml IV fluids and I brought home more to give her every day.  Luckily she is a good patient and sits while the fluids are going under her skin.  She is also now on thyroid medication as some of her values were quite low and although some of the main ones were normal we thought it would be a good idea to at least try this.  The thyroid is tied closely to a lot of the rest of the body functions.  She also got a B12 shot in acupuncture point 33 (stomach) as her cobalamin levels are very low also.

The one vet now suggests exploratory surgery but I do not want to go that invasive if we can work this out some other way…..possible diagnoses could be tumors or irritable bowel syndrome.

I fasted her for 40 hours.  Some people thought this was not the right thing to do to such an obviously very skinny sick dog…but when she wasn’t processing one thing that went into her, she was starving anyhow.  After 40 hours she got a very very weak chicken broth with 1/4 cup of rice.  She held that in her….next meal was weak broth with rice and a little chicken.  To that I have added Acacia fiber (1/8 teaspoon to start) and Slippery Elm.  I will keep her on the supplements as she seems to be doing very well on them.  Echinacaea and Golden Seal are also in the future.

So as of this evening, she is on her 6th meal in 2 days.  She is being fed 3 times a day and I will gradually add a little more chicken and rice each time.  This isn’t a balanced diet and I have started adding 1/4 vitamin tablet to 2 of the meals.  I don’t want to take anything too fast for fear of regressing her.  But it is hard to do that because I really want to put a huge bowl down and say “eat and gain!” but know that I need to take things slowly.  She is holding everything in her body and has not had any diarrhea.  In fact, I haven’t seen her go at all (but sometimes it is difficult to watch when you have 20+ loose dogs running around).

So, I am planning on keeping the blog updated on Onyx and what works for her.  Many people emailed me with great suggestions and some of them I will implement as Onyx gets stronger and able to take a little more into her system.  I will also keep in contact with the vets and just hope that what we are doing is going to work for her.  It is a tough problem.