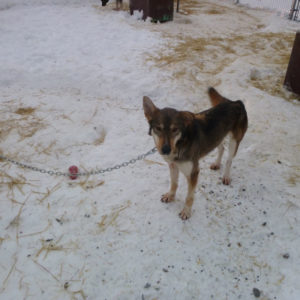 Update: Duncan has been adopted!

Everyone LOVES Duncan.  He is a sweet boy with a lot of personality.  He is social and friendly and seems to love all people.  Duncan has been a sled dog in the past but at the young age of 3, he started having seizures in the team.  Seems it happens when he is run for a little longer time.  His owner stated that he probably shouldn’t run more than 5 miles.  This guy is lean and strong and has a lot of energy.  His facial expressions just make you fall in love with him.  He will need an owner that will keep a close eye on him for seizures.  (I had a sprint dog for 11 years that had seizures!  But with vet care, they were managed and he was one of my best shorter distance running dog and skijor dog!) So don’t discount Duncan’s love for running and exercise if you are careful and watchful.

He would also make a great fun pet if given enough exercise.