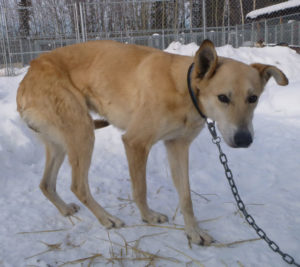 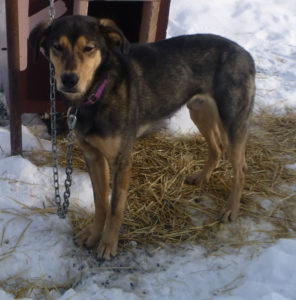 Update: The boys were adopted!

Update: Just found out that these 2 boys are borthers!!  So both are 2 years old.  Too young to be dropped off at the shelter.  They have great potential as they mature.

Update: March 21.  We ran 2 teams of shelter dogs today.  We put Namche and Khumba in the 2nd team.  These are big boys!  And strong.  Both switched between a lope and a trot.  The owner said they weren’t sprint capable and that is probably true.  They both worked hard in the team though.  We saw NO growling or any thoughts of not getting along with other dogs.  In fact Kumba was next to another male who was so excited and wanting to go that he was jumping on Khumba.  And there was no reaction from Khumba.  Good boy!  They are friendly boys in good health.  Probably best suited for a mid distance rec team that wants some power.

Namche (red) is only 2 years old.  Khumba is 5 years old.  Both dogs were running on a spint team but would rather trot then speed down the trail at 17 mph.  They come from great sprint lines and are reserved but friendly.  The owner wrote that they can be a bit growly with other males but I haven’t seen that at the shelter.  And now that they are neutered, it should alleviate any of those problems!   They are larger powerful boys who would love to live inside (short coated!) and go on long hikes and skijor runs.