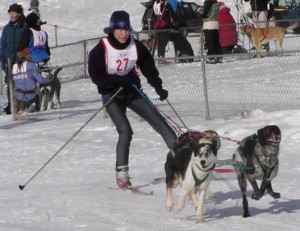 So someone has already said “Carol you are going to talk about dogs yet you said nothing about the 3 dogs in the picture!”  so here goes.

Chanel:  front left in the picture.  Chanel was one of only 2 dogs that I got as actual puppies.  She was a couple of months old when she came to my home.  When I first saw her she was in a puppy pen with a dozen other puppies.  She is the one that called out to me.  When asking about her I was told that she was a “wheezer” and would die within a year.  I went home with another puppy that day that the owners were wanting to give away (Venus) but still thinking about Chanel.  I called the owners back and pleaded with them to let me take Chanel.  They felt that she would not live long and that I was just setting myself up for heartbreak.  But I finally told them that at least I would give her a great life for a year if that was going to be the case.

When she was very young and harness broken (thank you Lynn!) I had to keep a very close eye on her.  A wheezer is a dog that has laryngeal paralysis.  It is often a hereditary condition and found in many dogs with black/brown/white faces and blue eyes.  Her larynyx would close and not let air in….a lot of these dogs would just collapse and die.  Well….I learned to watch for the signs with Chanel and as soon as she showed any signs of shortness of breath I would take her out of the team.  She could recover if she wasn’t hard in her harness.  And this dog LOVES to run.  She is a driven sled dog that works terribly hard.  I would keep a close eye on her tongue for starters.  If I saw even a tinge of it not bright pink and starting to look a little blue, that was the time to let her run free alongside the team.  Sometimes her eyes would look a little puffy too.  As she grew older she learned to regulate herself and back off when she was starting to need more air.  Now at almost 12 years of age she still loves to run and pull.  She has far outlived her 1 year death sentence.  I don’t run her more than 5 miles but as a dog that loves to run and pull it would have been cruel to let her lay around and get fat.  She is truly one of my soul mate dogs.

Robin:  front right.  Robin was my first ever sled dog.  He was 9 months old when I got him.  I had been skijoring with him for a month and finally the current owner asked me if I wanted him.  He was one of the most shy dogs that I have ever owned (and we have owned many!!) and also one of the few pointer mixes that to this day is in our yard.  Robin loved 3 people at that time.  Lynn, Brenna and myself.  He would hide under the truck at races and training.  No one could handle him.  It took great patience and gentle leadership to bring Robin out of his shell.  Now at the age of nearly 13 years old he loves most people!!  It was amazing to see his transformation over the years.  One thing that I do impress upon people with a shy dogs is “do NOT force the dog”…..I have seen too many people with shy dogs drag them up to people and force the dog to accept pets.  To me this just sets a dog way further backwards.  If it is traumatized by people, this is a sure way to reinforce that fear.  I like the dog to decide on its own when it is ready for others touch.  This can be accomplished by asking your friends not to touch the dog, but to toss it a treat and then move on.  If the dog realizes that the only thing that is going to come from other people is good stuff, then gradually they begin trusting more and more.

An amazing thing about Robin as a skijoring dog or a sled dog is that first…he loved to chase….so if he saw a team far ahead of him he would speed up to catch them…but the best was that, being so fearful, once he caught that team and we passed he would pick up speed just to get away from that person he passed.   Even after he became a friendly dog he still held onto that.  I never worried about my team slowing down or quitting after passing someone.  He taught most of the dogs to speed up!  Both Robin and Chanel have always been house dogs from the day I got them.

Crowe:  wheel.  You can barely see Crowe in this picture.  He was mid-age when I got him.  I had his sister Irish from a top sprint kennel.  Both dogs just didn’t work out well as open class dogs although both were fast and driven.  Their personalities were needy and clingy and their lack of confidence I believe hurt them in the long run.  Irish lived to be 12 years old and died of a spleenic tumor.  Crowe was retired this year (nearly 13 years old) but he was always a driving force in my limited class 4 and 6 dogs teams.  He never developed the confidence to be a great leader, but he would run up front.  Crowe is the dog in my yard that when all of the kennel is loose and running around and playing, he is the one with his head in my lap.  He has always had a bad need to be loved and close to people.  We do our best to fulfill his life.