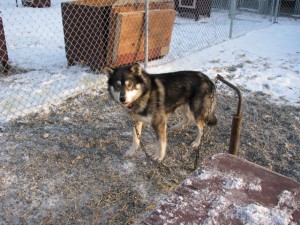 Update 10-17-2017: Kieran continues to do great in his foster home.  He is good around other dogs.  He is not an “in your lap” kind of dog, but has a sweet personality and an independent streak.

Update 1-7-2016: Kieran is doing great.  He is a strong wheel dog but also runs lead.  He has skijored and run in a team.  He is very versatile.  He often goes on free walks, but sometimes has a mind of his own and comes on his own time.  So, any new home should not let him off a lead until he is bonded.  We don’t want Kieran to go someplace where he is back on a chain in a sled dog yard.  He LOVES being in a team and loves being around other dogs.  But he has been used to being off a chain for over a year and would like to keep it that way.

Update 2-1-2015  Kieran has really come a long way.  Skijoring and learning the joy of living in a house.  He can run loose and he sticks around very close, but he is hard to catch.  He likes to play “keep away” but also loves to ride in the car, so, open the car door and he jumps right in.  He will need a very active home that will keep his sharp mind and athletic body stimulated.  He is a sweet boy looking for that forever home.

Update: 1-2-2015:  J. Russell is now being called Kieran.  He is doing great in his foster home.  He is skijoring with 2,3 and 4 dog teams.  He goes to Coldspot to socialize and has become a much more outgoing and receptive boy.  He loves to run around loose but then is hard to catch although he doesn’t run off.

Update: 11-15  J. Russell has been pulled into the Second Chance League.  He is in a wonderful foster home and will be available for adoption.

J. Russell is a 5 year old husky.  He is very shy.  He has a sweet personality but will take a very gentle person to bring him out of this shell.  He is outside at the shelter.