Written by Gilly and Carol 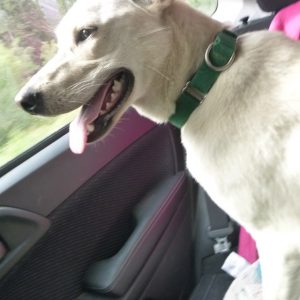 Gilly:  I was brought to the Fairbanks shelter with my mother for who knows what reason!!  I don’t!!  But my name used to be Whitey.  Then changed to Amelia at the shelter.  I didn’t really like either of these.

Carol and The Second Chance League got me out of the shelter and found me a great foster person in Lindsey.  She named me Gilly. I was at the shelter for 23 days with no one really looking at me (I was very shy).  Lindsey worked hard with me for nearly 3 months.  And I learned to trust her and love her!!  Something I didn’t think I could ever do.  Really trust a person.  She ran with me twice a day!  So much fun.  She soon started to let me run without a leash and I always came back to her!  I turned from a timid fearful dog into a happy girl, although I was still leery of many people.

Carol: Gilly is a smaller pointer/husky mix with a great personality and a big smile!  Lindsay did a great job of earning Gilly’s trust and we will be forever grateful.  Lindsey travels quite a bit for work.  Don and I even took Gilly for 10 days while she was gone.  So Gilly got to know us.  When someone (from Soldotna!) was interested Lindsey decided that since she traveled so much for work that it was in the best interest of Gilly to have a more stable home.  It was an incredibly hard decision for Lindsey to make because she really loves Gilly.

Gilly: So one day Carol comes by and we load a lot of my stuff (blankie, food, treats) into her car and we go for a long drive to a place called Talkeetna.  ROAD TRIP!  Fun!!  I think I saw some water stuff coming out of Lindsey’s eyes.  Humans do this.  Not sure why.  But I felt she was sad.

Carol: Gilly was pretty good in the car.  Stacie her new owner and I decided that Talkeetna was about half way for both of us.  So we decided to meet up there.  We took a couple of walk breaks on the way down and since we were early I got to run Gilly around for an hour before Stacie and her friend met up with us.  It was kind of sad for me because I had really grown to love this little dog, but I knew it would be a great home.  Gilly was unsure (of course she had never seen these people before!!) but we got her in their truck and I said to text if they had any problem and I drove 60 miles north to camp on my way back to Fairbanks. 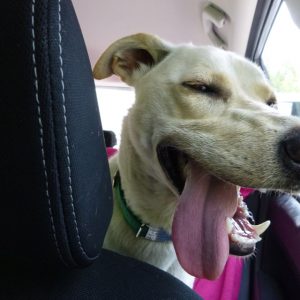 Gilly: I was tired after my long car ride but these nice people had all of my stuff so I went with them.  But I was unsure and a little scared.  Very scared actually!  They decided to camp that night before going to my new home the next day.  We went into Talkeetna.  At one point as Stacie was getting out of the truck I bolted over her and ran!!  I didn’t know these folks and I guess my fear instinct came back.  Stacie seemed so nice and I saw her a couple of times but I wouldn’t go to her.  Then I went into the woods and disappeared.

Carol:  I’m camped and got the dreaded text.  “Gilly bolted and we can’t get her.”  OH NO!!  So at midnight maybe 1 am (it’s all a blur) I headed back to Talkeetna.  Stacie texting me to where they were camping (down a sketchy road by the Talkeetna River).  We walked all the trails down there calling her.  A couple of other people were camped so we tried to respect them.  At 3:42 in the morning we heard a local dog yard (at the time I had no idea where it was) start to bark.  Maybe Gilly had found them?  She LOVES all other dogs.   Around 4 am we tried to get some sleep.  I slept until a little before 6 am.  At exactly 6 am we heard a couple of gun shots.  My heart sank.  I started to cry.  Please please….don’t let someone be shooting at a loose dog!

Gilly: I’m not sure where I was.  I had never been in such a large forest with ferns 5 foot tall and so much wetness and mosquitos.  I may have passed that dog yard.  Don’t remember.

Carol: I couldn’t sleep so got in my car a little after 6 and started driving around.  Trying to find that dog yard.  I came back to camp several times (Stacie may have gotten a couple of hours of sleep!  I think I had an hour) and once I saw Stacie was up we then started walking again.  All over.  We went into town and I got some paper and makers and started making signs.  Stopped at the RV park close to where they had lost her.  I asked the owner if he knew of a local dog yard.  Yes!  He drew me a map to Jerry Sousa’s place.  He is an Iditarod musher and his kennel is just over the hill from where we were camped.  I put up a sign at the RV park and Stacie and I headed to Jerry’s.  We thought no one was home so left a flyer on their door.  Kathy came out and we explained what had happened.  She said she would keep an eye out. I think I hung around 7 signs (which I did get later!)

Gilly: I’m so tired!  But Lindsey or Carol have got to be here somewhere!  I’ll keep looking and trying to stay away from all these other people.  Too many people. And bikers and runners and 4 wheelers.  I’m very scared.

Carol: We hung signs all over town and talked to dozens of people.  No one had seen the creamy little dog.  Stacie felt that she might not come up to us if it was both of us.  So I said that it might be good if they went home.  I think that Gilly would come to me but even after many hours some dogs just go feral and get afraid of everyone.  So I was worried.  They left and I spent the rest of the day walking and driving around and talking to many people.  I must say, the people of Talkeetna are really great!  Everyone was concerned.  Bill B. camping at the RV park and from Fairbanks said he was telling all the people in the campground about the little lost dog.  I was quite exhausted. I had gone to a little campground in town and around 8 pm I just couldn’t walk another step.  So I was sitting in my car and I get a phone call.  From Jerry Sousa!!  He had seen Gilly at the RR tracks and thought she looked lost but it wasn’t until he got home and saw the flyer we left at his house that he knew it was her. He told me where he last saw her so I jump in my car and head over that way.  No sign of her.

Gilly: Oh how tired I had become.  But I do like to meet other dogs and I like when I see people on bicycles and I saw a woman on a bike.  She was going fast so I chased her.  Maybe it was Lindsey or Carol!!  We crossed over this RR bridge to the other side of the river.  It was a narrow little people path.  But then I lost the bike and I couldn’t get back to the other side.

Carol: I called and called.  No Gilly.  I drove down towards the boat launch and at a big flat area there were a dozen people having a camping party.  I stopped my car and went over and asked if they had seen her.  I showed them a picture I had on my phone.  YES!!!  They said about an hour ago and they thought she went over the RR bridge.  I left my car and ran down there and up the rocky hill to the bridge.  Over to the other side.  I spent around 15 minutes calling and looking around.  No Gilly.  Then GILLY!!!  She was up the hill on the RR tracks!  We both stopped.  Would she bolt?  I started running the other way calling her.  Gilly Gilly Gilly.  Let’s go Run!  Gilly!  She screamed.  Actually cried.  She came tearing down to me screaming and jumping and elated to see someone she knew.  I was crying and got the leash on her.  I haven’t felt that kind of relief in a long time.

Gilly: CAROL!!  I can’t believe it.  There she is!  I was terrified on the RR tracks.  I couldn’t seem to find the way back across the bridge.  I ran so fast to her.  I knocked off her glasses and nearly knocked her down.  I was crying and so happy.  Carol had that water coming out of her eyes and she was hugging me and I could feel she was so happy.

Carol:  I was bawling.  I didn’t know if she would be found.  If she had been shot.  If she was heading back to Fairbanks through dense forests.  I went back to my car and when the campers saw me they ALL leaped out of their chairs throwing their hands in the air and cheering. 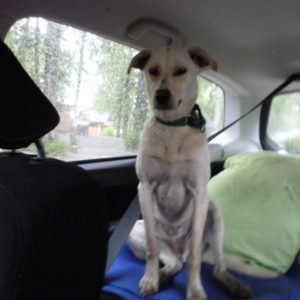 Gilly: Gosh was I tired!!  I don’t think I layed down at all for nearly 24 hours.  And no one had seen me in 20 hours.  But there was Carol and there was her car.  Heaven!

Carol: I can’t thank the people of Talkeetna enough.  After I had texted to Don and Stacie and called Lindsey to say that I had her, the outpouring from my heart to all the people looking for this pup overwhelmed me.  And Jerry really set the ball in motion with that first phone call that she had been sighted.  We went back to the campground and slept in the back of my car.  I was to meet Stacie at 9 am in Anchorage.  I’m happy that Stacie decided to stick with this little dog even though she bolted.  Stacie is a runner and a very active outdoors person so I knew it would be a great home for Gilly.  They just needed time to bond. 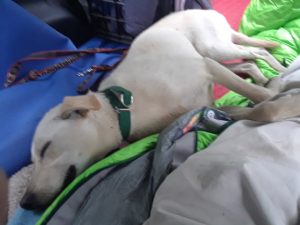 Gilly: Oh I was so very very tired.  I fell asleep and Carol would often have to move my legs off her or from under her and she said I was like a “gumby” dog.  Whatever that means!!  I didn’t wake up.  The next morning we took off again and I slept all the way.  I saw Stacie and wagged my tail and when she opened her truck door I jumped right up in.  This time she put me on a leash so I couldn’t bolt, but I don’t think I will do that again.

Carol: I had 27,500 steps on my garmin watch for that day.  And that was just walking around Talkeetna and all the trails.  I was happy to head north and drove all the way back to Fairbanks (with a stop for a 2 hour nap!).  Gilly met Stacie’s friend’s dogs and that was good to do that as Gilly just loves other dogs and she certainly loved these dogs.  She is getting used to the cat in the house.  She has a plush dog bed and 6 acres of land with about 1/2 acre fenced in.  I’m hoping to hear more great things about this girl.